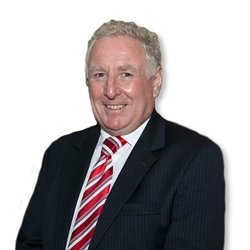 Clients are people not numbers.

Alan has been a consistent top performer in the Wakatipu real estate market for over three busy decades. Apart from an intensive knowledge of the area he has the benefit of an impressive local contact base carefully managed and developed on a daily basis, he really is the ‘go to’ guy if you want some sound advice, enthusiasm and energy in your real estate plan.

Being a father of three and now a ‘poppa’ to his six grandchildren you might even hear a few of his legendary ‘dads jokes’ on occasions (the office have heard them all).

Alan is somewhat of a pioneer in the area when it comes to real estate having run his first auction campaign in Queenstown in 1985. Now an accomplished auctioneer and a veteran of many hundreds of successful auction sales he remains a firm advocate of this method of sale, always believing it is fairest and most progressive way to help buyers and sellers alike. His biggest single sale was lowering the gavel on a group of Queenstown Commercial properties for 60 million dollars.

Despite his longevity and dedication to the industry Alan believes it’s not so much how long your real estate career spans, it’s about being current, up to date and treating each day and each client as a new beginning.

Not surprisingly there are many accolades for his community involvement, 24/7 approach to business and getting a result that’s needed. The phone is always on and Alans wife knows that the meals are on hold when a deals happening.

‘Sutton’ is a well-established name in Wakatipu real estate circles and apart from his own success Alan does enjoy contact with other salespeople and business folks throughout the region who can create valuable extra business opportunities.

In his view every customer deserves respect and to be heard. He says “it’s so easy to win an argument, but lose a sale”. He also believes that putting a result before income is salespeople key and often the anti-climax in a sale is getting paid.

If you’re thinking of a plan to buy, sell or invest, give Alan a call and soon you will have a solution.

“Your service has gone well beyond what anyone would expect. Although the sale took longer than we both expected I knew early on that I could trust you. This made the process easy for me and all your extra time and work is much appreciated.”

“In March 2012 my brother and I engaged Alan to sell our property in Brisbane Street, Queenstown. Alan was immediately engaging and impressed with his ‘sales plan’ approach and thoroughness. His suggestion was to go to Auction to realise the property’s full value to which we agreed. Alan’s ground work, networking and energy produced a number of potential buyers at Auction however, as in best laid plans, we received a prior offer, accepted and completed a very amicable sale. Had this not happened I am convinced we would have sold at Auction given the interest generated. Well done Alan.”

Paul and Jane, 32A Brisbane Street

“Thank you so much for your excellent work and the result for the 13 Kawarau Place listing. Your enthusiasm and communication throughout the marketing has been terrific and I have truly enjoyed the process, thanks to your confidence and so it seems, your enjoyment of it too!”

“Alan has been very helpful to us with both our transactions buying & selling. He has made them both a very pleasant experience for us. He has been reliable, on time, and great with follow up and above all, very professional to deal with!”

“Alan recently sold our parent’s property, and he achieved a great end result for us. He was also very supportive to us all during a very emotional and difficult time for the family. We have no hesitation in recommending Alan’s ability!”

“I would like to recommend Alan Sutton for the wonderful job that he did in marketing and preparing my property Clifton Estate for Auction. This is the first time that I have used Auction as a medium for selling, and would recommend to you to give it a go. At no time was I uninformed about what was going on, all visits to the property were acknowledged and I was told the outcome of each and every one of them. I am happy to report that the piece of land sold well and that on the day we had good response from interested people. I found Alan a delight to work with and am pleased to say that I have retained him to sell more land for me.”

“Lee and I would like to thank you most sincerely for the work that you put into the sale of Wynyard Cres. I know from my own experience in the Industry that we would have been the Vendors from Hell !! Your sense of humor and dedication to the task made it a real pleasure to work with you. It was certainly a frustrating exercise in getting the property to the point where it was saleable and many others would have given up long before that was achieved. Murphy’s Law certainly applied with this property!! Thank you once again Alan and I hope that we have the opportunity of meeting up with you again sometime in the future.”

“Alan Sutton and the Locations/Bayleys team were extremely attentive and helpful throughout the whole selling process. We were first time vendors and with Alan’s guidance we ultimately got a great result. We were out of town vendors and Alan kept us up to date with photos and regular emails. He even sent us photos during heavy snow fall, which obviously didn’t stop him from working. Alan was always available by phone to answer all our questions (which we had a lot of) and ultimately got us a great sale. We would recommend Alan Sutton and the Locations/Bayleys team to anyone looking to sell their property in Queenstown.”