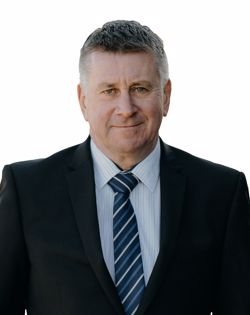 The decision to take up real estate seemed a natural fit to Derek Enright, who has an affinity with the land, a good business head, and an easy way with people. Born and bred on sheep and dairy farms, Derek took on a farming cadetship after leaving Wesley College. He then diversified into horticulture and worked in the kiwifruit industry. Derek owned his own orchards and worked in related industries including beekeeping, spray contracting and pruning. He also worked in the post harvest sector, managed pack houses while still a kiwifruit grower himself, and was involved in early trials of gold kiwifruit.

After moving to Rotorua 17 years ago, Derek purchased a number of residential rentals, which he managed successfully for a few years but eventually sold as the country life was calling. He farmed in Ngakuru Valley where he also invested in half a dozen lifestyle blocks which he renovated and sold. Well known in the area.

In the eight years that Derek has specialised in rural real estate he's built a solid client base and established his integrity as a sales consultant. He knows what it's like to be on both sides of the fence. Derek has chosen to affiliate with the Bayleys brand as it's smart, strong, well respected and a household name around the country. His clients benefit greatly from the support that he gets from Bayleys.

Derek is professional and friendly, with good listening skills and a relaxed, engaging manner with people. He's an astute negotiator, who avoids force and coercion. Derek not only brings passion for real estate to the job but a knowledge of farming and business experience, along with sound advice you can trust.

When the decision to sell my farm was made, my son Phillip, who was leasing the land and myself contacted Derek Enright, Bayleys Rotorua to market the property.

Derek explained the different options and it was decided going to auction was the best choice for us.

From the day the contract was signed, Derek with his PA Kelly Corcoran worked tirelessly to bring everything together for a very successful auction which was held seven weeks later.

I found the experience with Derek and Kelly to be very informative, their help was beyond approach and they were only too happy to answer any queries from Phillip and myself.

I would highly recommend Derek, Kelly and Bayleys to anyone who is thinking of selling rural property.