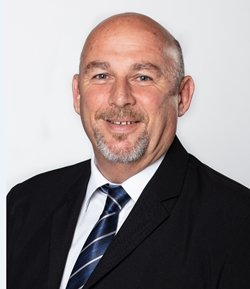 Dean is the General Manager for Bayleys Taranaki and is based in the New Plymouth office, overseeing the day to day operations for this region, across all property sectors.

Dean is a loyal and passionate member of the Bayleys team and has an extensive background with strong rural ties over many years. He was extremely excited about the opportunity to take on the GM  role and return to Taranaki, along with his wife Lea. They are both happy to have returned to Lea’s home province and Dean’s “adopted one” after more than 20 years living outside the region.

In his time with Bayleys, Dean has worked as a successful and self-motivated country salesperson in the Manawatu and Horowhenua region as well as taking on a role as Country Manager for the overall Manawatu-Wanganui team for a number of years.

Born and educated in Gisborne, Dean attended Taratahi Agricultural Training Farm after leaving High School and prior to entering the dairy industry in South Taranaki. This saw him work his way through from a general farm worker, to sharemilker, and certainly gave him a strong affinity with the dairy industry.

His previous experience as a livestock buyer spans back to 1996, in the Taranaki, Manawatu and Horowhenua region. Prior to this he worked as a sharemilker and Policeman in rural Taranaki and developed an in-depth knowledge of all things effecting rural communities.

With the interaction in the rural community over this time, Dean has built an excellent rapport with many farmers and rural professionals, and has a large networking database of prospective clients, as well as good rural contacts throughout the country.

Outside of work Dean is involved in a number of community activities, with a particular passion for Rugby, having been a player, coach and administrator for many years. He was a long-standing Chairman/President of the Shannon Rugby Club, having been on the committee since his arrival in the district in 1998. He played his last game of competitive rugby in 2010. His wife Lea also has a long involvement in the Shannon Rugby Club, previously holding positions of both Secretary and Treasurer.

At the end of 2014 Dean was elected as President of the Horowhenua-Kapiti RFU and was also awarded the prestigious Charles Monro Trophy at the Steinlager NZ Rugby awards for Volunteer/Administrator of the year.

Dean also held the position of President of the Horowhenua Boys & Girls Agricultural Club, who are responsible for the overall running of the Lamb & Calf days throughout the Horowhenua area. He has been on the committee, as well as a judge, since his 1999, through until moving back to Taranaki in 2018.

Both Dean & Lea are very community minded and have been involved in a number of fundraising ventures including ongoing support of Make a Wish. Bayleys affiliation with make a Wish is a great partnership and Dean has been recognised as a Super Giver to this since 2016.

Dean finds his role in the Bayleys Team extremely satisfying and has the support of not only his local team but also the expertise and support of the complete Bayleys Group.

Dean is a strong advocate of the Bayleys portfolios, including the Country Magazine, Total Property and Waterfront, ensuring that our vendors properties are promoted locally, nationally and worldwide.

Dean enjoys getting involved at all levels of the business with members of the wider teams and displays a strong degree of leadership with an honest, reliable and no-nonsense approach to both real estate and life in general. Dean is always available to discuss your requirements in strictest confidence and see how Bayleys can assist you with your Real Estate requirements.