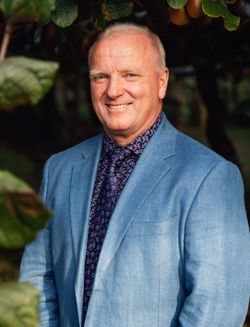 Snow began working in the kiwifruit industry in 1980 and attended the Bay of Plenty Horticulture Cadet Scheme in 1981 – 1983. By the finish of the scheme, at a young age, he was managing orchards, had a contract gang and in 1996, bought an orchard which he re-structured and re-husbanded before selling in 2004.

The highs, lows and challenges of the kiwifruit industry are part of life for Snow and his ‘hands on’ knowledge qualify him well to attend to the needs of those who buy and sell kiwifruit orchards. He also established a 120 tree avocado orchard and enjoyed growing and marketing avocados for 15 plus years.

He has sold large numbers of horticulture properties, farms and lifestyle blocks, often at substantial premium prices due to his outstanding passion and negotiating skills.

He began working as a Real Estate Salesperson in 1993, later taking an ownership interest in a company for over a decade and achieving Top Rural Salesperson for three consecutive years, before joining Bayleys in 2012 as part of the very effective Country team.

With Bayleys, Snow has achieved Top 5% status nationally continuously since 2014, and in 2017 had the honour to win Bayleys National Top Individual Salesperson. For Success Realty, Snow earned Top Bayleys Country Office Salesperson in 2017 & 2019 and in May of 2019 he was awarded Realty Groups Prestigious Overall Salesperson of the year 2019. Snows most recent honour was to win the Rural Salesperson of the Year at the 2019 REINZ Awards for Excellence in Real Estate.

A keen gardener, he enjoys tending the needs of his 30 strong Belted Galloway cattle herd on his 25 acre farmlet in the Papamoa Hills.

A ‘passionate and parochial member of the Te Puke and wider community’ his personal mantra of ‘accept, adapt, achieve’ resulting from personal tragedy, and a desire to be the best he can be for his clients, family and himself empower him to strive to deliver for those who he serves.