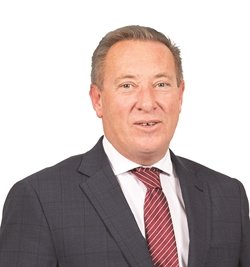 Russell has been Whanganui’s commercial salesperson of choice for the past five years. Having sold the majority of Whanganui commercial industrial sites and development land, he also looks after commercial leases and business sales.

After moving to Whanganui from Wellington in 2015, Russell essentially started from scratch. It was this humble beginning, plus a lot of hard work and positive attitude that resulted in him quickly gaining momentum in the commercial real estate market. Russell joined Bayleys in 2017 and took up the task of positioning Bayleys in the commercial real estate space. He chose Bayleys for their strong branding, nationwide network and marketing channels that could assist in selling Whanganui properties to buyers located out of town.

With a large database and an expanding number of listings, Russell grew the commercial team to provide added security for local building and business owners. Jordan Davis joined Bayleys in 2019 and was trained and mentored by Russell until he became a licensed real estate salesperson.

In his spare time, Russell is an executive member on the Mainstreet Board, an organisation that keeps Whanganui’s CBD a vibrant and thriving centre.  Russell is also the President of the Laird Park Sports Centre and is a keen lawn bowler.

Community involvement, organising charity tournaments and offering free advice to people and organisations are just some of the strengths and value you can expect from Russell.

An all-round supporter of the growth and development of the Whanganui region, Russell has been responsible for connecting many business people together and brokering some very large real estate transactions. Russell takes pride in providing his clients with the best service whether it be buying, selling or leasing commercial real estate.