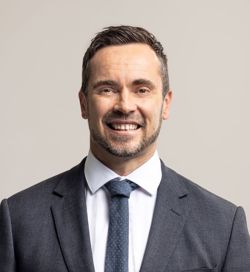 As Bayleys General Manager Commercial & Industrial – South Island, William’s role is diverse and all encompassing. Known for his high energy, William thrives on motivating teams and working with individuals to achieve the best for their clients.

William brings a huge depth of international knowledge and experience, having risen through the property ranks over two decades. Originally hailing from South Africa, he enjoyed a hugely successful career working initially for Broll Property Group/CBRE where he cut his teeth in the agency world. This saw him working in the development industry for one of South Africa's largest privately-owned property developers with some of the largest and most successful mixed-use developments in South Africa including the award-winning 450,000sqm Melrose Arch precinct in Johannesburg. William was responsible for overseeing the leasing and sales of the entire development, including 100 separate retail units making up 36,000sqm of retail space. Additionally he handled sales, leasing, acquisition and property management for several other major mixed-use precincts around Cape Town, including the 46,000sqm Yacht Club development and the 200,000sqm Harbours Arch precinct.

This experience has equipped William with an end-to-end knowledge of commercial and industrial property, including an ability to provide in-depth analysis of each property’s constituent parts in order to identify where the value lies, and highlighting that value to the buyer market. He now translates this extensive knowledge to a high-performing Bayleys team capable of delivering better than expected results. William’s long career also means he brings extensive and highly valuable networks to his role including relationships with institutions, funds and high net worth individuals.

Competitive by nature Williams will always go the extra mile for his staff and their clients. He considers high levels of client care has been one of the major contributors to his success. Having worked for corporates extensively, William values the family values Bayleys encompasses and aims to instil these in his team.

Outside of work William enjoys surfing and any free moment he has he can normally be found in the water. William will be getting involved with assisting lifesaving organisations with their junior training programme. William has completed a full Iron Man in 2013 and has represented South Africa for longboard surfing culminating in him winning the South African Longboard Surfing title. He has also competed in many longboard surfing events in New Zealand at local level.

Work hard play hard is William’s motto and he is passionate about providing all the value he can to the Bayleys commercial and industrial South Island team and their clients.